Posted by .Robert Sullivan at Saturday, April 30, 2011 No comments:

I wonder if people know that Thoreau and his brother are sometimes said to have pioneered the idea of a school field trip, at least in and around Concord, Massachusetts? Pioneered, that is, taking young people out of the school room, out to see a boat maker make a boat, out to see a surveyor survey? The Thoreau brothers were both teachers, and of course, the Transcendentalists in general thought that schooling needed reform—take Alcott, who saw the poetry of kids, the poetry that, I would argue, is often schooled out of them, even today, instead of encouraged. Even at Harvard, which Thoreau attended, things were bad, students rioting, standards low. Thoreau used to say that Harvard taught all of the branches of knowledge and none of the roots. Being a teacher, he supported teaching, and education was less a chore and more of a joy.

Posted by .Robert Sullivan at Saturday, April 30, 2011 No comments:

Thoreau is often portrayed as a man against taxes. This is wrong. People who believe Thoreau to be anti-tax cite his essay, “Civil Disobedience.” Far from being a split from society, “Civil Disobedience” is a bold statement of citizenship, of the necessity of putting in your share, and it’s part of the formulation of the utopian vision of Walden. It is almost not about avoiding taxes. Even in skipping some taxes, Thoreau emphasized that there are other taxes he needed to pay, that he was too civil to resist. One of the best lines (or one of my favorites, anyway) has to do with the road. You wouldn’t know it in the way it has been given over to the automobile today, but the road is a public space, perhaps the first public space, and when Thoreau talks about the road in “Civil Disobedience,” the road is the connection to everything and everyone outside of himself—the road concerns the importance of staying connected. To wit: “I have never declined paying the highway tax, because I am as desirous of being a good neighbor as I am of being a bad subject; and as for supporting schools, I am doing my part to educate my fellow countrymen now.” Speaking of community, here is a passage from President Obama's recent speech, at Georgetown University, in Washington, D.C.:

But there’s always been another thread running through our history -– a belief that we’re all connected, and that there are some things we can only do together, as a nation. We believe, in the words of our first Republican President, Abraham Lincoln, that through government, we should do together what we cannot do as well for ourselves. And so we’ve built a strong military to keep us secure, and public schools and universities to educate our citizens. We’ve laid down railroads and highways to facilitate travel and commerce. We’ve supported the work of scientists and researchers whose discoveries have saved lives, unleashed repeated technological revolutions, and led to countless new jobs and entire new industries. Each of us has benefited from these investments, and we’re a more prosperous country as a result. Part of this American belief that we’re all connected also expresses itself in a conviction that each one of us deserves some basic measure of security and dignity. We recognize that no matter how responsibly we live our lives, hard times or bad luck, a crippling illness or a layoff may strike any one of us. “There but for the grace of God go I,” we say to ourselves. And so we contribute to programs like Medicare and Social Security, which guarantee us health care and a measure of basic income after a lifetime of hard work; unemployment insurance, which protects us against unexpected job loss; and Medicaid, which provides care for millions of seniors in nursing homes, poor children, those with disabilities. We’re a better country because of these commitments. I’ll go further. We would not be a great country without those commitments.

The Harbor with Accompaniment

See the harbor as it was. Sure, it was polluted as hell; swimming houses, sometimes floating docks in the harbor, mostly closed up show by the 1930s. But there was lots of economic activity. Stuff being moved that would today be moved on the highways that help us keep our locally driven mileage high, as well as our asthma and obesity rates. Imagine if the harbor was this full with ferries now? Imagine if we worked with it, rather than against it. Imagine if we included in our definition of the environment something that was along the lines of health, or, more precisely, a larger consider of the public health. And then—and this is just to much imaging, but it is spring, after all—imagine if these jobs were jobs again, and jobs with OSHA regulations, with health care? (video via Rogert Ebert's Journal) 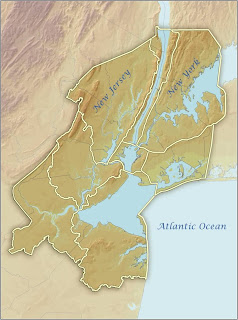 From the Times: The Great Lakes. The Mississippi River. The Chesapeake Bay. The Everglades. And now, ladies and gentlemen, the New York / New Jersey Harbor. The area’s aquatic network has been designated one of the nation’s Great Waters by a consortium of conservation groups called the America’s Great Waters Coalition. 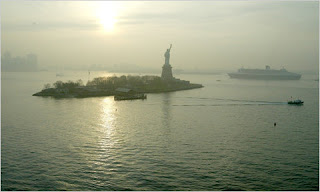