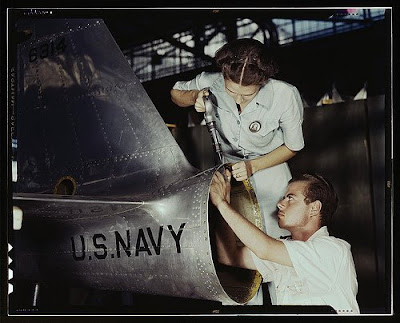 Thoreau was big on the question that asks you to look at whether you are using technology or the technology is using you. Our car industry has long driven us in the wrong direction. We are now, whether we like it or not, at the wheel. Let's turn Detroit into a transportation capital, rather than a place that makes machines that pollute our air and our water as well as our downtown and our generally activity-less lives. Let's mobilize ourselves, a la the New Deal, perhaps (see photo), to turn Mo-town into T-town, which doesn't sound as cool but is. Imagine turning the interstate highways into interstate high speed busways, just for instance. Michael Moore is onto this, and here are a few points of his multi-pointed plan:

1. Just as President Roosevelt did after the attack on Pearl Harbor, the President must tell the nation that we are at war and we must immediately convert our auto factories to factories that build mass transit vehicles and alternative energy devices. Within months in Flint in 1942, GM halted all car production and immediately used the assembly lines to build planes, tanks and machine guns. The conversion took no time at all. Everyone pitched in. The fascists were defeated.
2. Don't put another $30 billion into the coffers of GM to build cars. Instead, use that money to keep the current workforce - and most of those who have been laid off - employed so that they can build the new modes of 21st century transportation. Let them start the conversion work now.

3. Announce that we will have bullet trains criss-crossing this country in the next five years.

4. Initiate a program to put light rail mass transit lines in all our large and medium-sized cities. Build those trains in the GM factories. And hire local people everywhere to install and run this system.

5. For people in rural areas not served by the train lines, have the GM plants produce energy efficient clean buses.