A Few Words for a River 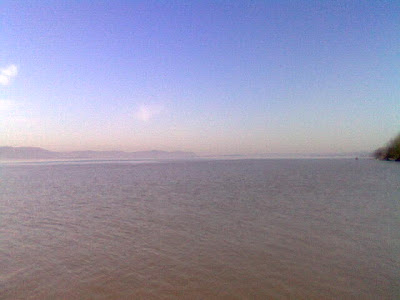 Let's say a few words for a river, our river over here, near the Thoreau Your Don't Know's basecamp, the Hudson. But let's not use the name "Hudson," and let's not just say any words. Let's repeat the words of Seamus Heaney, who the T.Y.D.K. staff happened to see last night, at the first annual (most likely) Princeton Poetry Festival. Let's repeat the words Heaney used when he read a poem called "Saint Kevin and the Blackbird," which we have in a collection called "Open Ground." One thing that the poem is about is Saint Kevin, who, while in his cell in the Wicklow Mountains, had extended his arm out the window, when a blackbird landed in his hand. Saint Kevin, not wanting to injure the bird, or the nest, or both or anything, held his arm in place. Said the poet: "Kevin feels the warm eggs, the small breast, the tucked/ Neat head and claws and, finding himself linked/ Into the network of eternal life,/ is moved to pity: now he must hold his hand/ Like a branch out in the sun and rain for weeks/Until the young are hatched and fledged and flown."
We love this poem, always have, love it more now, as we likely will when we next spend time with it. One of the many things we like about it is that it puts a positive spin on not doing, on standing ground, on holding still: it takes a lot of work to hold still, to hold back in life: "A prayer his body makes entirely/ For he has forgotten self, forgotten bird/ And on the riverbank forgotten the river's name." But what have we done? Just in saying that much we said too much.
Posted by .Robert Sullivan at Wednesday, April 29, 2009 No comments: 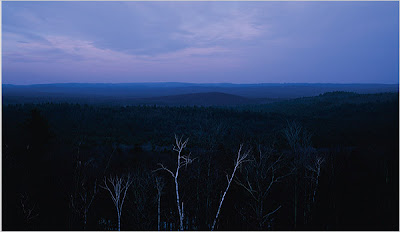 Here's another way to look at trees, brought to you by the staff of the Thoreau You Don't Know.
Posted by .Robert Sullivan at Sunday, April 19, 2009 No comments:

In Cape Cod, a book by Thoreau that is popularly thought of as a travel book, Thoreau goes a long way in changing the notion of American exceptionalism, emphasizing that the country is great not because God says it is, but because it is constantly recharged by people looking to reinvent America, to make their own exceptional voyage into the future of a new place. Here is a related take on what makes, or maybe ought to make, American exceptionalism, exceptional:

(via Professor G. Brewer, via the Daily Dish)
Posted by .Robert Sullivan at Thursday, April 09, 2009 No comments:

The Thoreau You Don't Know staff was recently buttonholed at a party, and presented with the following statement: "I heard that Thoreau was never went out in the real wilderness, that he was no John Muir." There is a lot for the staff to say about this, including, bt not limited to the following: Thoreau was writing about a "partially cultivated wilderness" (i.e., his local farming, lumbering, village shop- and artisan-filled community); Thoreau hiked with friends; Thoreau did in fact do a little Muir-like time in Maine; Muir liked Thoreau, or his work, anyway. But what should also be pointed out was that Muir was no Muir, or at least not what we might call the Pure Nature Guy. What we mean is he dealt with the corporate interests in the world at the time, which were substantial, to create parks, the first National Parks, in essence. Here's this from an excellent piece, by Robert Pogue Harrison, on Muir in the March 12, 2009 issue of the New York Review of Books, which seems to indicate that conservationists might work more closely with economic interests to fashion new kinds of 21st Century conservation:

Muir became a fixture of the steady tourist traffic to Yosemite in the early 1870s, an eccentric guide and congenial raconteur who impressed Emerson and P.T. Barnum, just as he would Theodore Roosevelt many years later. Part of the fascination of Worcester's account ["A Passion for Nature: The Life of John Muir," by Donald Worster, Oxford University Press] is to see how Muir's concerted conservation work emerged only in 1889 when he was already in his fifties, as part of the sudden wave of progressivism that swept America toward the end of the Gilded Age, and how this conservationism oddly sought corporate allies during its first flush of grassroots organization, accommodating itself to pragmatic, utilitarian, and commercial pressure, utilitarian, and commercial pressures of many kinds.

Muir's life and work is an example of how quickly things can change, how much affect a small group of passionate people can have on the government and society, how a good idea (national parks) has legs. Something Thoreau used to say, by the way, was, "[T]hank God they cannot cut down the clouds."
Posted by .Robert Sullivan at Thursday, April 09, 2009 No comments:

Speaking of bicycles, the good people at Streetsblog, America's #1 public space reporting team, have posted a list of The World's Best Music Videos Featuring Bicycles, including this one by the New Zealand biking team, Flight of the Conchords.

This one is too:

If you have been having trouble getting out of bed, if you have turned to your friend or co-worker or significant other and said, "[Dude/Co-worker Bill/Honey], what is there to look forward to?"--well, the answer is here, in the form of a recording of the Book Court reading of the Thoreau You Don't Know, which prominently featured the Washington Square Harp & Shamrock Orchestra, as well as a special guest appearance by the How Not To Get Rich Orchestra.