Here's a very HDT review by Ginia Bellafante, TV critic extraordinaire, with a mention of the little know International Bureau of Metaphor, as well as a sci-fi situation related to this.
Posted by .Robert Sullivan at Sunday, June 28, 2009 No comments:

What Did You Do on the Solstice? 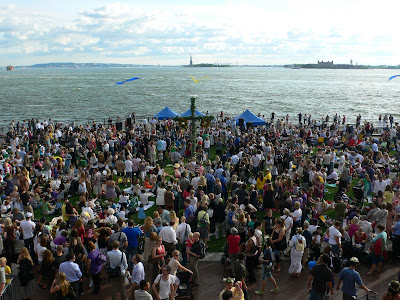 Here at TTYDK, we took in Scandinavian fiddling, and a maypole dance, down at Battery Park, where the view is very nineteenth century, if you forget about the stevedores. Below is a snippet of ASI Spelmanslag, the fiddling group of the American Swedish Institute in Minneapolis, Minnesota, who flew in to play the so-called midsommar festival--waltzes, polskas, marches and schottisches. As noted fiddler recently told us, "Scandinavian fiddle music is one of the few fiddle musics where there more fiddles you have the better it sounds." This seems very true, and we wish it were a metaphor for more things, though not everything, of course.