Is it just us over here at The Thoreau You Don't Know or is this cool? (Can't find your glasses?) Our favorite letter at this particular moment is V for Vocation, a word that seems like it might be proposed as an alternative to career. And now, some of the accompanying text from the designer, P.J. Chmiel: Life in years to come may not be the same life we enjoy today, at least in a material sense, but it can be a lot more rewarding than the work/shop/TV/sleep/die life that most of us now lead. The key to weathering the storm lies in joining together in closer-knit groups of family and community; the solutions will not be coming from the top-down, they will be happening from the ground-up...
Posted by .Robert Sullivan at Wednesday, March 04, 2009 1 comment: 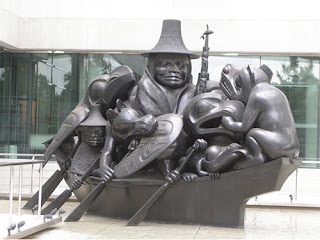 From David Byrne's always bike-friendly journal, at the point where he is talking about meeting the mayor of Vancouver, B.C., after a show there:

After the show, I was told that the mayor was backstage. Keith, Mauro and I hauled a bucket of beers and wine into the green room, where the guests were waiting. The mayor, Gregor Robertson, and his wife Amy chatted with most of us, and it turned out they had arrived on bikes! At one point they seemed slightly antsy, so as an out I offered that they probably had to get going, but they hung around — and after a bit, we all went to a nearby bar-rest for local wine and mussels. I chatted with Robertson about my own bike rides around Vancouver, and how NYC has made great strides in becoming more bike-friendly. I mentioned the efforts of Enrique Peñalosa, Janette Sadik-Kahn and Jan Gehl in transforming some cities into more livable places.

Robertson said that there has been a radical transformation of the land and cityscape in a generation. Vancouver is no longer a small city, and having seen all the new condos and office buildings here, I wondered aloud if developers were simply unstoppable; if the city might lose some of its charm and character; that the human scale of the city will be lost if profit is left as the prime force determining urban texture. In Peñalosa’s terms this means that people with lots of money determine how everyone else lives, and what kind of city we all live in — which, he feels, is undemocratic.

“I don't really see them as unstoppable. I'm doing the aikido thing, moving that drive for building and profit into the most positive outcome possible for the community. Not a simple thing. But my hopes are high.”

Photo from Byrne's journal, of a sculpture by Bill Reid, the great Haida artist. The staff of the Thoreau You Know has spent a lot of time in Pacific Northwest Coast Canoes and they are solid! They are also semi-public transportation.
Posted by .Robert Sullivan at Wednesday, March 04, 2009 No comments:

Buses are cool, even if they are the public transportation most disdained by the drivers of the car. Buses are fun, and even hand-held communication friendly, as opposed to say driving and Blackberrying in a car. Bus Chick, whose column for the Seattle Post Intelligencer is here, proves it, having taken a bus to the hospital when her named-for Rosa Parks child was born. Like the staff of the Thoreau You Don't Know, she is car free, as you can see:

Via Clarence Eckerson Jr. on the most excellent Streetsblog.
Posted by .Robert Sullivan at Wednesday, March 04, 2009 No comments: