Being Down is In and Being Up is Out 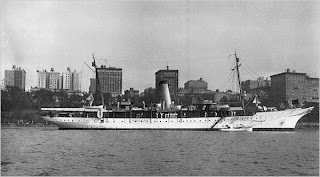 This is J.P. Morgan's yacht, as featured in the New York Times, and parked, I would guess, off the old raggedy shore of Manhattan, well before the term luxury condo was born. According to the Times 'Your Money' section, conspicuous consumption is not so cool anymore.

“There’s a shift to get away from glitz,” Ms. Kaufman said. “I’m almost starting to feel that luxury is a dirty word.”

This isn't the first time glitz has gone uncool. The Times notes:

Conspicuous consumption has gone out of style before, in the recession that followed the 1980s stock market boom; and briefly after Sept. 11, 2001, until spending was recast as patriotic. But for a precedent for such a complete about-face in people’s attitudes toward luxury, you would have to look to the Great Depression. In 1932, wary of insulting the vast number of unemployed Americans, J. P. Morgan Jr. kept his 343-foot yacht, Corsair IV, in the boatyard, Ron Chernow wrote in “The House of Morgan.”

Among those who remained solvent in the Depression, there was “a widespread sense that you don’t flaunt your success,” said David E. Kyvig, the author of “Daily Life in the United States, 1920-1940: How Americans Lived Through the Roaring Twenties and the Great Depression.”

People laughed at Thoreau and his buddies when, in the 1840s and 1850s, they talked about how some people were racing to build second houses when a lot of people were being kicked out of one. In 1857, when the U.S. economy was crashing, when banks began to fail, the ones that remained solvent suspended currency payments and we headed into what would later be known as the Depression of 1857, Thoreau wrote his friend H.G.O. Blake:

The merchants and company have long laughed at transcendentalism, higher laws, etc., crying ‘None of your moonshine,’ as if they were anchored to something not only definite, but sure and permanent. If there was any institution which was presumed to rest on a solid and secure basis, and more than any other represented this boasted common sense, prudence and practical talent, it was the bank; and now those very banks are found to be mere reeds shaken by the wind. Scarcely one in the land has kept its promise…. Not merely the Brook Farm and Fourierite communities, but now the community generally has failed. But there is the moonshine still, serene, beneficent, and unchanged. Hard times, I say, have this value, among others, that they show us what such promises are worth,—where the sure banks are.