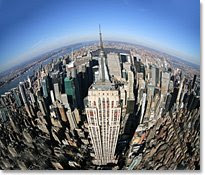 The staff at the Thoreau You Don't Know wrote a piece in last week's New Yorker and then forgot to post it. It's about the signal, and your reception, and it raises either no questions at all or questions such as, Are you in a position to see and hear? Are you receiving the signal or any signal at all? Here is the Talk of the Town piece mentioned, and here is an excerpt:

The handoff of the White House seemed like a piece of cake next to America’s transition from analog to digital TV signal. With the White House, you switch residents but get a lot of the same stuff: podiums, helicopters, tour groups. With the switch that is officially taking place in television transmitters around the country starting this week, you could wind up with frame skipping, frozen screens, or, worse, nothing (as in snow). Bill Beam, the engineer in charge of the signal that WABC-TV sends off the Empire State Building, said recently, “We don’t know how it’s all going to wind up.” In the months leading up to the switchover, the city’s anxious cable- and dish-less citizens have been turning for answers to the Antenna King.

Lately, the Antenna King himself—a.k.a. Henry Langan—has not been in residence at the Antenna King headquarters, in the shadow of the Gowanus Expressway. Once, he ruled the rooftops of Brooklyn, Queens, Staten Island, and the Bronx, places where today there are still a few hundred thousand people using old-style antennas to watch “Dancing with the Stars.” (The relatively wide-open vistas of the outer boroughs make them antenna-friendly; Manhattan, by comparison, is practically terra incognita to the Antenna King, save for a few satellite dishes.) Steven Langan, Henry’s son, is in charge now. “I’m the Prince,” Steven said the other day, at the Antenna King showroom. 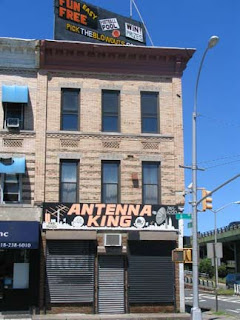 Here is an excellent report on the neighborhood in which the Antenna King resides, Brooklyn's Leif Ericson Corridor, as it is referred to at this most excellent site, Forgotten New York.
Posted by .Robert Sullivan at Tuesday, February 24, 2009 No comments: