Playing the markets playing off us!

A performance that gets to the heart of what's happening in terms of dealing with "shameful" pay and stock markets crashing and Madoff and oil prices and reform and celebrity reform and cash, as well as Tuscany--by Beardo, yet another modern day Thoreau:

The market's gone all soft and the world has gone all hard.

The Opinionator shares this excellent video in today's post entitled The Early Word On Daschle's Exit:
Posted by .Robert Sullivan at Wednesday, February 04, 2009 No comments: 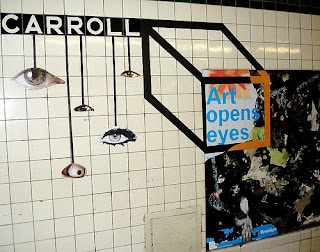 You only have to be a subway rider to know the work of Poster Boy, as show in this Flickr photo (above) by Poster Boy & Aakash Nihalani. Subway advertizements are cut up, pieces from one mixed into another, a nose from Angelina Jolie finds its way, for example, to something along the lines of a Viagra ad. Now this, from Gothamist:

Last night before a benefit he was scheduled to participate in at a loft in Soho, the street artist known as Poster Boy was arrested by an undercover cop. Poster Boy was listed on a flyer for the event, a festival put on for Friends We Love, a series of videos documenting the process of a dozen different artists, including Poster Boy, who talked with us just last week.

Photographer Jim Kiernan tipped us off to the arrest. He arrived at event at Broadway and Howard Street to meet up with Poster Boy around 7 p.m., but police had already arrived after spotting the Poster Boy's name on the flyer. Kiernan says, "There was an undercover cop on the block and they came and picked him up. As far as I know, he's still in Central Booking right now and waiting to get in front of a judge...It's the second time they've gotten him."

Reports indicate that the police believe they have found Poster Boy, but can there only be one Poster Boy making Poster Boy-esque vandalart?

He was reported by the Times to have been taken to Rikers Island. Word was that he was moving on to bigger things anyway: