Such a stiff! That's all we at The Thoreau You Don't Know ever hear about Thoreau. Meanwhile, his journals talk about skating and boating, and all the fun associated with hanging out outside in the cold. In fact, Thoreau is writing at a time when the ideas of work and play were separating. He makes a long joke about skating and collecting wood on the frozen surface of the pond--sort of killing two birds (work and play) with one stone. Work at a house--the kind of work that he wrote about while at the pond--was being more and more described as "women's work." (See Catharine Beecher’s A Treatise on Domestic Economy, published just before Walden.) From the Thoreau You Don't Know:

Most radically, while Beecher attempted to change the perception of work from “vulgar” to “noble,” Thoreau aspired to combine labor and leisure, to make vigorous work more like spontaneous play. “Idle time” was the bane of the new industrial economy. For Thoreau work was itself a pastime. In the roots of the word labor, Thoreau saw an opposite. The Latin noun means work, labor, toil. The Latin verb can mean to slip or to fall away or to glide by. In the “House-Warming” chapter of Walden, the narrator skates across the pond, collecting firewood as he glides joyfully. At a time when work and leisure were first becoming separated in America, Thoreau wrote that “men labor under a mistake,” and the mistake he was talking about was that people were confusing work for work when it could also be play. They were becoming obsessed with making a living and forgetting to have a life. 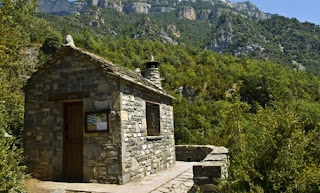 This story (above) is out there a lot these days, which is to say: we at the Thoreau You Don't Know aren't the only one thinking that Thoreau is feeling particularly relevant at this moment in history, or re-history. One of our staff just called from a cell phone to say something along these lines: "Look, think about it. A lot of people who are in their thirties and forties, they have been through the good (economic) times. They are not used to the bad (economic) times. They don't know how to cope. They need a way to cope." The rest of the staff here agrees, but we chafe when we see a headline--RECESSION!--and then a picture of a cabin in the woods, or a description of Thoreau living simply, with no TV. Coping doesn't mean running away; it doesn't call for asceticism. It means sticking around. Thoreau didn't leave town, even when he went to Walden Pond. That was his point. To find Labrador at home, the far magnificent Utopia in your soul, in the sound of the guy whistling down the street.

To wit, from Walden:

What does Africa- what does the West stand for? Is not our own interior white on the chart? black though it may prove, like the coast, when discovered. Is it the source of the Nile, or the Niger, or the Mississippi, or a Northwest Passage around this continent, that we would find? Are these the problems which most concern mankind? Is Franklin the only man who is lost, that his wife should be so earnest to find him? Does Mr. Grinnell know where he himself is? Be rather the Mungo Park, the Lewis and Clark and Frobisher, of your own streams and oceans; explore your own higher latitudes- with shiploads of preserved meats to support you, if they be necessary; and pile the empty cans sky-high for a sign. Were preserved meats invented to preserve meat merely? Nay, be a Columbus to whole new continents and worlds within you, opening new channels, not of trade, but of thought. Every man is the lord of a realm beside which the earthly empire of the Czar is but a petty state, a hummock left by the ice. 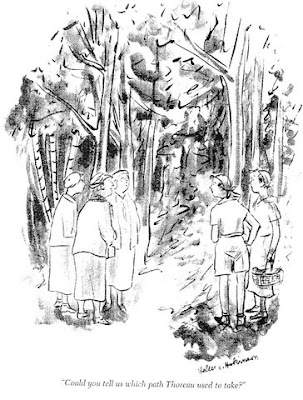 As is well known, we at the Thoreau You Don't Know welcome submissions of all and any kind. Why, just the other day at a staff meeting a bunch of us were saying, Wouldn't it be great if we had nothing to do at all?--at which point a fight broke out between the people who thought they were in change of nothing and those who though they were in charge of all. Here is an old New Yorker cartoon, sent in by an alert reader of the Thoreau You Don't Know:
Posted by .Robert Sullivan at Tuesday, March 03, 2009 No comments: