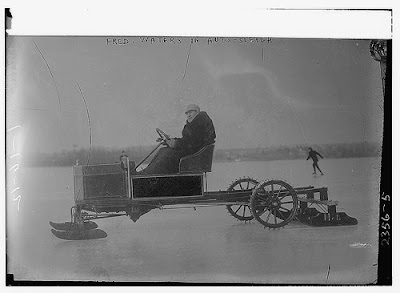 It has been very cold in Maine lately, as this report in the Boston Globe attests:

The coldest temperature ever recorded in Maine, a frigid 50 degrees below zero, was reached when a blast of Arctic air hit New England last month. The record is tied with a thermometer reading from 1933 in Bloomfield, Vermont for the coldest recorded temperature in New England history.

January was a colder month than usual in many parts of Maine and New England. The record-breaking temperature was recorded the morning of January 16, after a mass of Arctic air plunged into Alaska and northern Canada, and traveled eastward into New England.

Once, in the winter, many years ago, when I had been cutting holes through the ice in order to catch pickerel, as I stepped ashore I tossed my axe back on to the ice, but, as if some evil genius had directed it, it slid four or five rods directly into one of the holes, where the water was twenty-five feet deep. Out of curiosity, I lay down on the ice and looked through the hole, until I saw the axe a little on one side, standing on its head, with its helve erect and gently swaying to and fro with the pulse of the pond; and there it might have stood erect and swaying till in the course of time the handle rotted off, if I had not disturbed it. Making another hole directly over it with an ice chisel which I had, and cutting down the longest birch which I could find in the neighborhood with my knife, I made a slip-noose, which I attached to its end, and, letting it down carefully, passed it over the knob of the handle, and drew it by a line along the birch, and so pulled the axe out again.

Photo Library of Congress--Fred Waters in Auto-Sleigh, between 1910 and 1915.
Posted by .Robert Sullivan at Saturday, February 28, 2009 No comments: 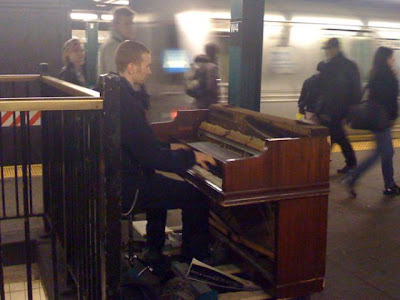 This is what we at The Thoreau You Don't Know are talking about, and it comes via Flicker as first spotted on Gothamist.
Posted by Robert Sullivan at Saturday, February 28, 2009 No comments:

Like Conan O'Brien, Thoreau went to Harvard. In the New York Times Book Review this weekend, Jennifer Schuessler writes of Flannery O'Connor, who is the subject of a great book review by Joy Williams:

O’Connor never made the best-seller list, but she did catch the eye of the budding literary critics Tommy Lee Jones and Conan O’Brien, both of whom wrote Harvard undergraduate theses on her work. In his Class Day speech at Harvard in 2000, O’Brien described the awesome, kryptonite-like powers of his analysis: “I wrote a thesis: ‘Literary Progeria in the Works of Flannery O’Connor and William Faulkner.’ Let’s just say that, during my discussions with Pauly Shore, it doesn’t come up much. For three years after graduation I kept my thesis in the glove compartment of my car so I could show it to a policeman in case I was pulled over. License, registration, cultural exploration of the Man Child in ‘The Sound and the Fury.’ . . .” Jones, according to The Boston Globe, received cum laude honors for his opus. O’Brien’s thesis grade has apparently not been disclosed.

Also like Conan O'Brien, Thoreau was big on getting laughs out of his lecture audience, though today have lost their sense of humor when it comes to (a) Thoreau and (b) nature, among other things.
(Photo NYPL Digital archives here--New York's first known comedian.)
Posted by .Robert Sullivan at Saturday, February 28, 2009 No comments: