When Thoreau was in New York 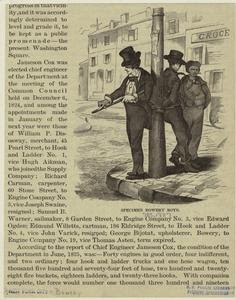 A lot of people don't realize that H.D. Thoreau worked in New York for a while, as a semi-successful free-lance writer, and as a door to door salesman, selling subscriptions to a magazine. This was when he lived on Staten Island, in 1843. He also visited the city on numerous occasions, in his capacity as part-time C.E.O. and chief engineer (my titles but they are accurate) of the family pencil and later graphite business. While there, he hung out in various places around the city (Henry James' house, the Hudson River waterfront, the salt marshes where now the Fresh Kills landfill sits), including the City Hall area, where publishing was centered. While downtown, I have to believe he heard nicknames, such as these, presented by The Bowery Boys, the most excellent Victorian New York blog, as culled from Luc Sante's Low Life, and introduced like so: "Just in case you're sick of reading '25 Random Things' lists on Facebook, feel free to post this tally of 19th and early 20th century bar owners and criminals in retaliation."

Thoreau in the News 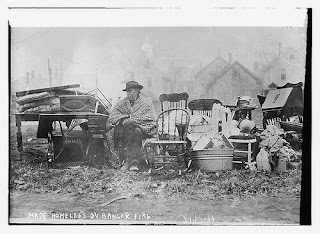 Here is Thoreau in the news, in Maine, where Thoreau liked to go to be in the woods (at least, after he went there first to look for a job and had some awkward resume peddling experiences: “A sensitive person can hardly elbow his way boldly, laughing and talking, into a strange town, without experiencing some twinges of conscience, as when he has treated a stranger with too much familiarity..."). The kicker in this column by Gordon L. Weil of the Kennebec Journal & Morning Sentinel is this observation on what you might call human ecology--he suggests an alternative spending of the $18.4 billion dollars already spent in controversial corporate bonuses:

If you paid people $40,000 a year with full benefits including health care, that bonus money would have paid 306,667 people for a year.

I would just add that Thoreau was also thinking of the well-to-do as being desperate. A good example is the scene in Walden wherein the authorial "I" is planting his garden while a couple of people from Boston, riding in a fancy gig (what would be the Lexus sedan of 2009), look at him as they make their way to their country house as if he were a nut or, to use his joke, a kind of crazy vine. It's a portrait of disengagement, in the time when the idea of a country house, or retreat, was becoming a middle class necessity, along with servants, hourly wages, and coffee table books. Here is more of the Journal column:

Do you wince when you hear a Washington insider or a Wall Streeter refer to "ordinary people"? I do.

I guess those who call us ordinary people must be "special people." They have the power to reach into our pockets for taxes or fees or to control some of our conduct.

It seems that the folks in charge either ignore or take advantage of ordinary people.

Take health care. Members of Congress have a great government-funded program. Congress seems intent on debating endlessly whether health care should be privately or publicly insured, while about 40 million ordinary people go without.

Or taxes. Tom Daschle, nominated to be health policy chief, failed to pay some of his taxes. He used a company limousine for personal purposes, but did not consider it income, he said, because he had grown accustomed to such service when he was Senate majority leader. Daschle withdrew, partly because his tax problems looked so bad to ordinary people.

Or pay. President Obama says it is "shameful" that Wall Street execs were paid $18.4 billion in bonuses at the same time as hundreds of thousands of people were losing their jobs and Washington was pouring hundreds of billions of dollars into their financial institutions.

If you paid people $40,000 a year with full benefits including health care, that bonus money would have paid 306,667 people for a year.

Or bailout money. Most ordinary people run, or work in, small businesses and community banks or use them. They get no bailout or aid, because they never got into trouble.

Meanwhile the auto manufacturers, who stuck with gas guzzlers too long, and the financiers who conjured up housing schemes that collapsed, get help that will come largely from ordinary people.

Henry David Thoreau, as good a philosopher as America ever produced, once wrote: "The mass of men lead lives of quiet desperation." The mass of men and women are the ordinary people.

The special people may struggle to make things better for ordinary people, but their lives -- corporate jets, big bonuses, congressional perks -- are far from desperate. They seem to live in a cocoon of privilege and miss some simple things that could help.

Thoreau might argue that, in fact, the simple things are luxuries.
Posted by .Robert Sullivan at Thursday, February 05, 2009 No comments: