Speaking of Steven Colbert, who addressed the idea of the commons yesterday,

as noted by the N.Y. Times' Opinionator, the commons is old: that we live in the commonwealth, sharing the general good, predates kings, of course. The idea seemed to have died in the U.S., as the country aged--some towns in New England still keep their center-of-town commons common--i.e., a park--but the commons are returning in a lot of differnt ways. As far as a common landscape goes, Thoreau was referencing the English when he referred to keeping lands and land forms in a kind of common bank, for the civic good. Here's this from The Thoreau You Don't Know:

Thoreau was not a conservationist, per se; the job title did
not yet exist. But he was on his way to becoming one. He
recognized that Concord needed land- management practices
similar to those followed in En gland. “Why not control
our own woods and destiny more?” he asked in 1860.
He wondered why people did not donate land to the town.
He saw that trees—as well as hills and ponds and natural
landmarks— were as much a part of the town as its homes
and statuary, and that the landscape had a civic value, a
value off the books. “What are the natural features which
make a township handsome?” he asked his journal the year
before he died. “A river, with its waterfalls and meadows, a
lake, a hill, a cliff , or individual rocks, a forest, and ancient
trees standing singly. Such things are beautiful; they have a
high use which dollars and cents never represent. If the inhabitants
of a town were wise, they would seek to preserve
these things, though at a considerable expense; for such
things educate far more than any hired teachers or preachers,
or any at present recognized system of school education.”

Corporations may not like the idea of the commons, but--whether we are talking about videos or blogs or songs or arts or crafts or books or patents--we have more in common in the common than is commonly recognized.

In Thoreau's time, one of the fads was walking in the moonlight. 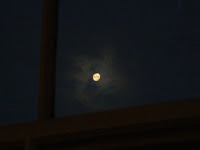 A lot of the so-called Transcendentalists would go out on hikes in the Walden woods, or any of the nearby woods that weren't cut down--most were--and hike on nights when there was a full moon, or close to it. In addition to the many Romantic ideals that moonlight and moonlit walks touched upon, they also spoke to the idea of finding new ways to adventure in your backyard. The past few night have been good moon hiking nights. 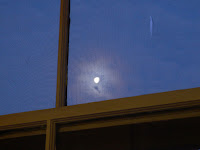 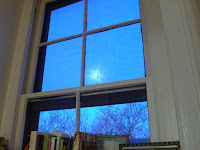 Posted by .Robert Sullivan at Tuesday, January 13, 2009 No comments: