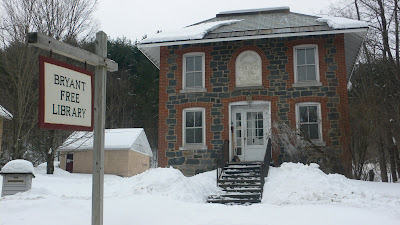 Up in the woods, looking at forests, I ran into the public library in Cummington, Massachusetts, birthplace of William Cullen Bryant, the poet and one-time editor of the New York Post, the paper which, today, has on it's front page the following headline concerning Alexander Rodriguez, the Yankee who most recently admitted taking steroids: "A-Hole!" He is famously featured in Asher Durand's painting, Kindred Spirits, which used to be in the New York Public Library but now is in the Wal-Mart Museum in Arkansas. The area featured in the painting was visited by Thoreau. You would never know it from Durand's painting, but the area was, at the time of the painting, heavily logged. On a trip there, Thoreau got to know the logger, and liked his rustic living accommodations.
Posted by .Robert Sullivan at Monday, February 09, 2009 No comments: